【Celebrating the Centenary of the Party】 Damon Relives His Original Intention , Pursues Dream on A New Journey

In 2021, the Communist Party of China ushered in its 100th anniversary. The hundred year journey is magnificent, and the century-old aspiration has grown stronger and stronger. In the course of one hundred years of struggle, a number of outstanding communists have emerged in the land of China. They have devoted themselves to the cause of revolution and shed their blood for the country, in exchange for today's happy life. They devote themselves to socialist construction, stick to their original intention and mission in different posts, and devote their youth to the people. They work hard and forge ahead, contributing to the realization of the "Chinese Dream" of the great rejuvenation of the Chinese nation.

The motherland is strong, leading the new journey, and the Party is striving for a new era. On the occasion of the centennial of the Communist Party of China, I wish our Party eternal youth and vitality, the Party's cause is thriving, and the motherland is prosperous! Do not forget the original intention, all the way forward!

Pass the torch, live it to the fulles 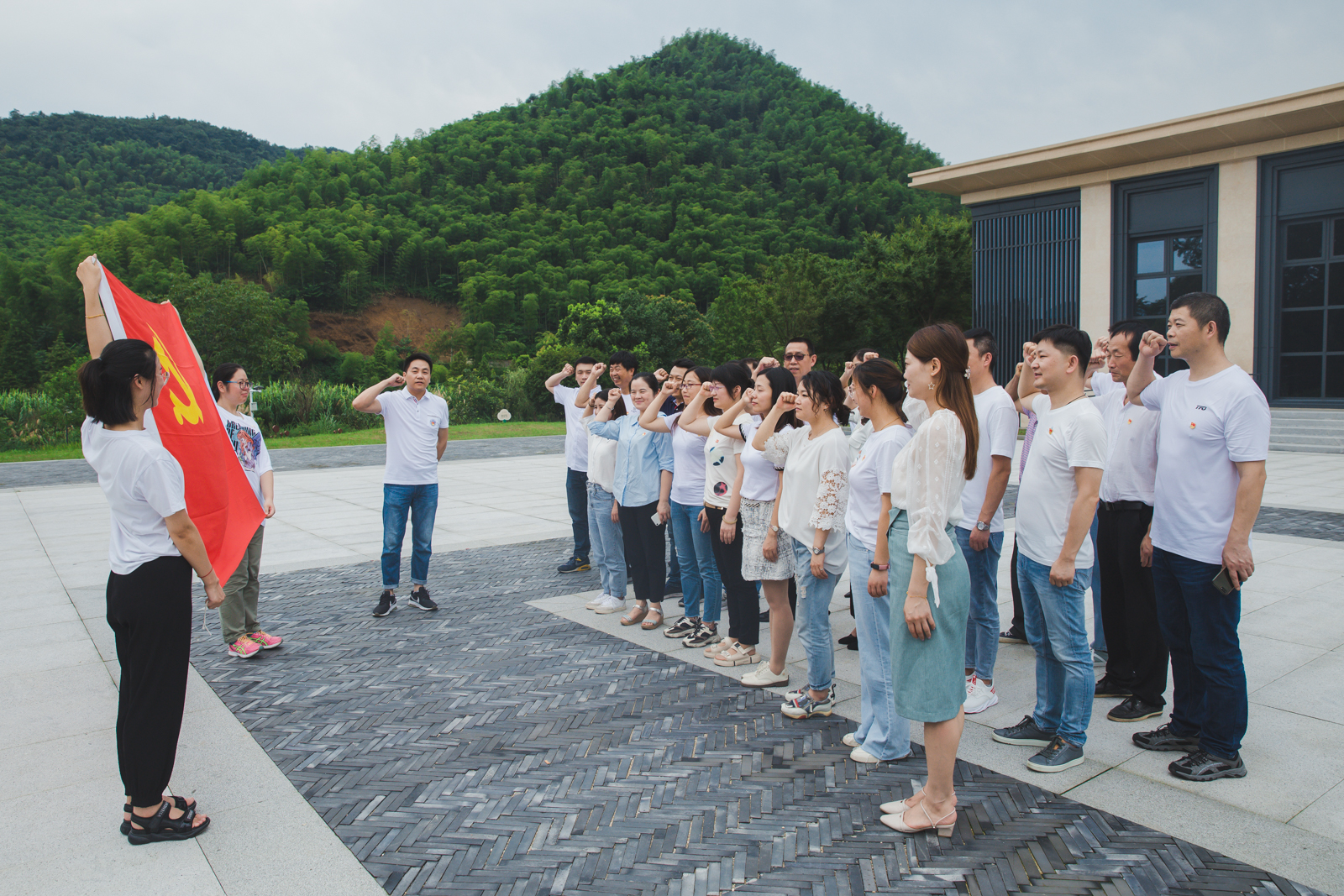 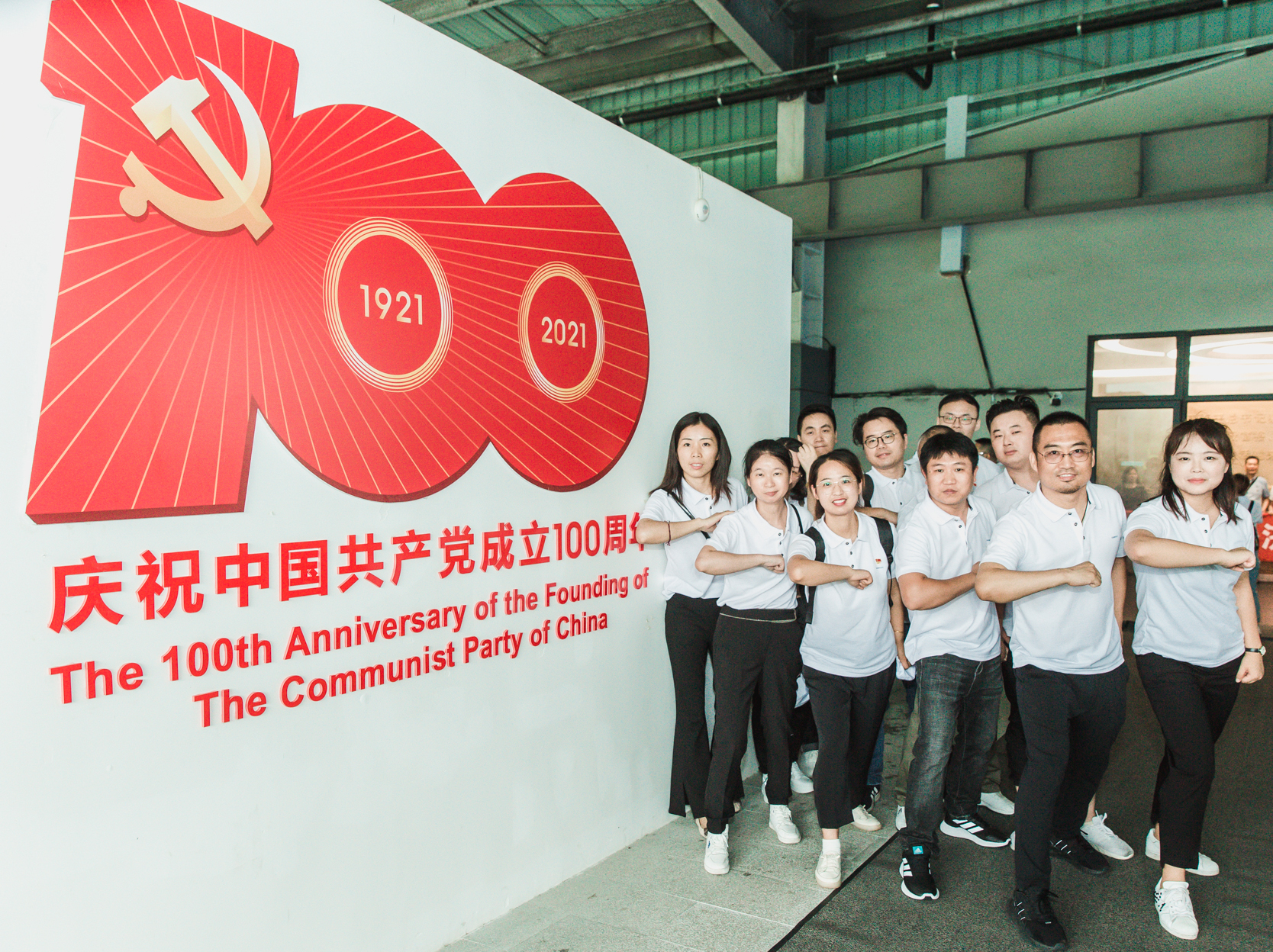 In order to strengthen the Party's leadership over the Damon Party branch, give full play to the role of the combat fort of the grass-roots Party organizations and the vanguard role of the Party members, the Party branch of the company was upgraded to the general Party branch committee in january2007, with four branches under it. In September 2016, the general branch of Damon Party of Zhejiang Damon Technology Co., Ltd. was promoted to the Party committee. Over the years, under the correct leadership of the Party committee and the government at the higher level, the Damon Party committee has been working hard to promote construction of the Party, and the Party building has been carried out with the labor union building and the Chinese Communist Youth League committee building. It has conscientiously implemented the theory that "Production Technology is the First Productive Force", firmly followed the path of scientific and technological innovation, united and contacted the Party internal and external departments and the masses, earnestly completed the company's business objectives and completed the tasks assigned by the Party committees at the higher level, to enable the Group to develop rapidly, continuously and healthily.

A Party member is a flag. In the new era of Damon, there are such a group of people, who inherit the glorious tradition of their predecessors, with constant ingenuity, down-to-earth, and scrupulously perform their duties. At the same time, they concentrate their efforts, overcome difficulties, have the courage to innovate, and strive for the production, operation and rapid development of the whole company. They are the epitome of tens of thousands of Communists. For our generation's responsibility, they are firm in their belief, and they play an important role as a new force. On the occasion of the centennial of the founding of the Party, Damon Technology has launched a special interview with outstanding Party member representatives with "Mission on the Shoulders, Original Heart Like a Rock" to pay tribute to every ordinary and great Chinese Communist Party member around us and present a gift for the centenary of our Party. 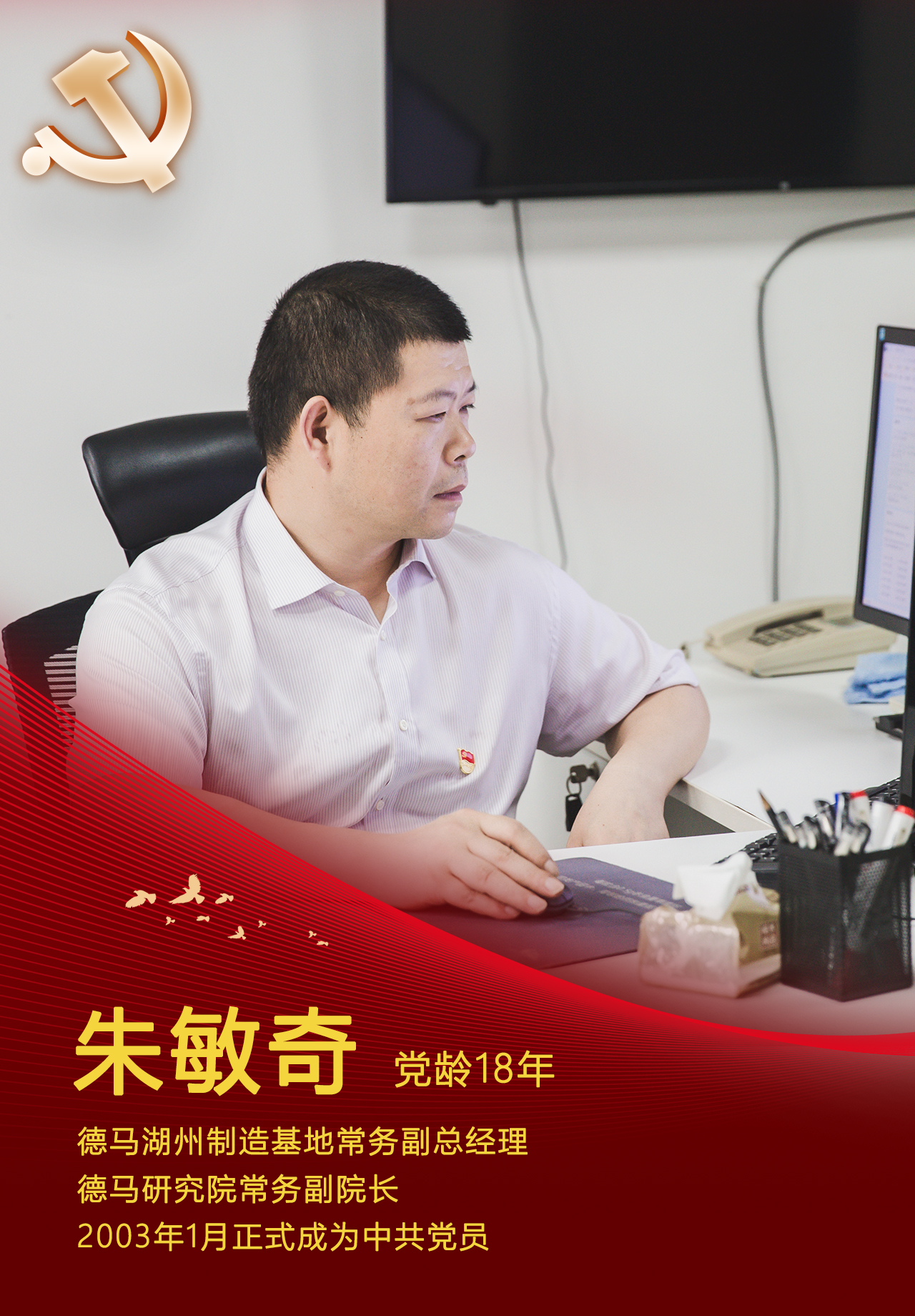 Since joining Damon in 1999, Comrade Zhu Minqi has been engaged in logistics product design and technical management for a long time. He has studied and learned technology assiduously, and has the courage to innovate. He has devoted himself to product research and development. After ten years of hard work, he has become the core technical backbone of the company and cooperated with domestic colleges and universities to summarize and compile technical data of Damon conveyor, and presided over or participated in a number of national, provincial and municipal major scientific research projects, and also has been rated as the National Labor Model of Machinery Industry and the Reserve Talent of Huzhou Academic and Technical Leader. At work, he worked hard and made him an example. He actively advocated the promotion of new software applications in the department, regularly trained with the team, updated and mastered product development skills, trained a large number of professional talents for the company, and enhanced the strength of the R & D team. His technical team won the title of "Huzhou Excellent Technical Innovation Team". He led the team to stay at the project site for a long time to participate in the installation, debugging and problem handling, repeatedly test and modify the products, overcome various difficulties and lack of experience, significantly improve product quality, reduce production costs, create good economic benefits for the enterprise, and make contributions to the development of domestic and foreign markets. 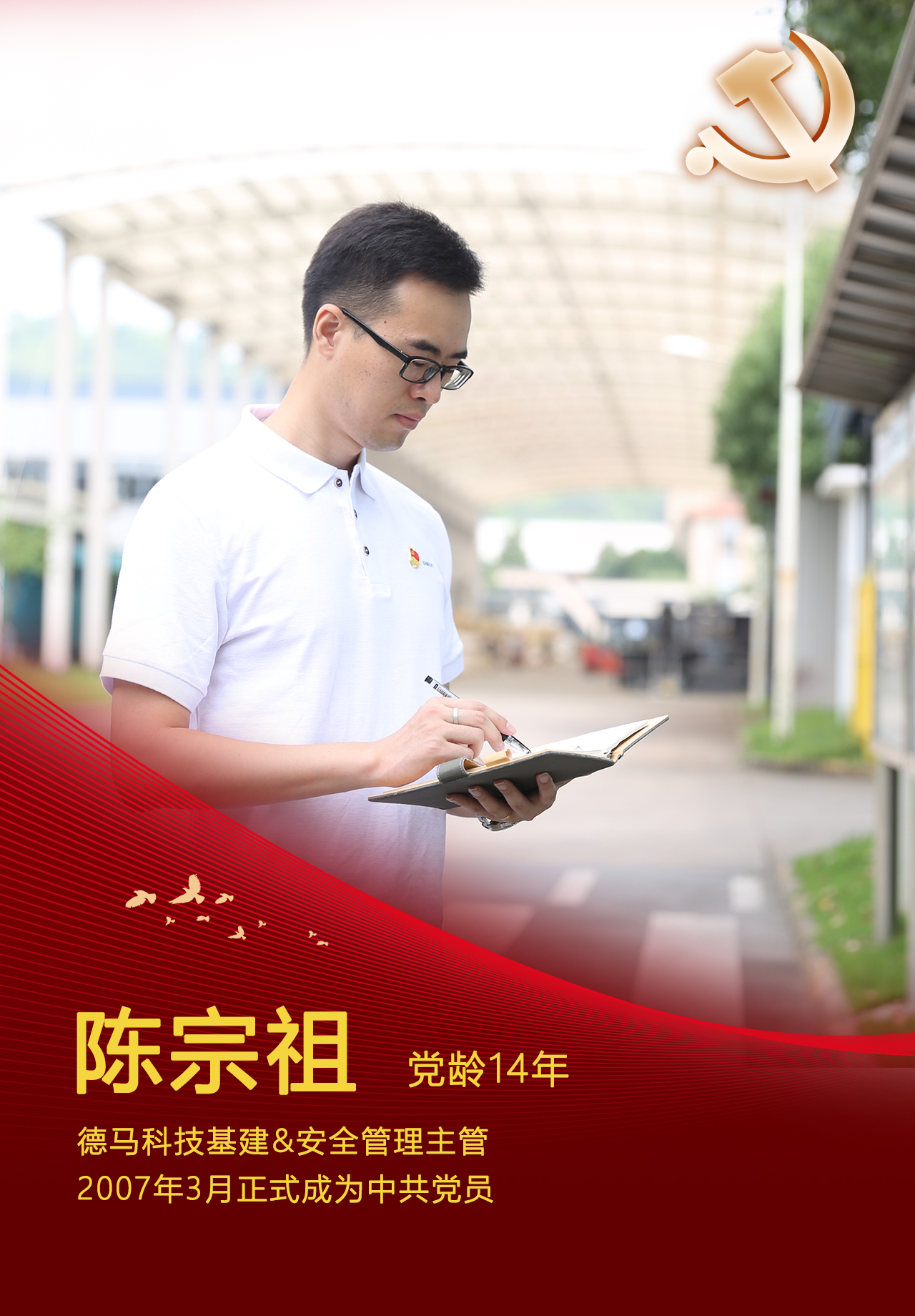 Comrade Chen Zongzu, as the safety supervision supervisor of Damon, has made his own contribution to the safety production of the company. In the daily safety management, he always does a good job of supervision and guidance, and plays a leading role. By means of education, publicity, guidance, rewards and punishments, incentives, and group activities, he constantly improves the safety production literacy of employees, improves the safety awareness and behavior of self-protection, and strengthens the construction of enterprise safety culture, making the staff change from passively obeying the implementation of management system to actively and consciously taking actions according to safety requirements. As a member of the Party committee of the company, he has always been strict with himself as an excellent Party member. He is open-minded, patient and friendly to his colleagues and has been unanimously affirmed by the company and the Party committee leaders. He has been successively rated as "Excellent Party Member" in Wuxing district and Daixi Town, "Advanced Individual of Safety Production Management" in Wuxing District, and "Excellent Employee of Inheritance and Innovation / Teamwork" in the company. 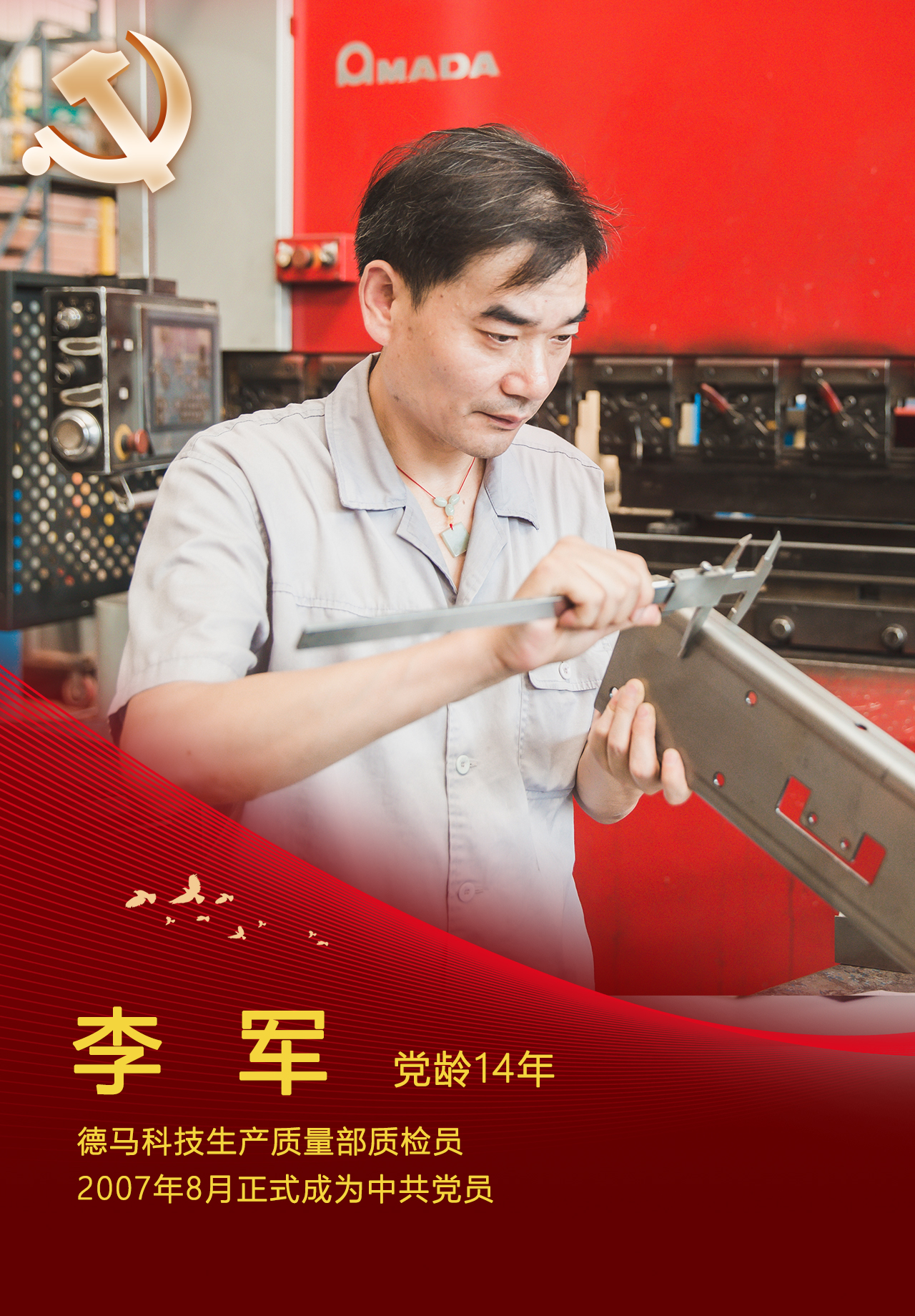 In the past 20 years since he joined Damon, Comrade Li Jun has been conscientious and proactive. He is responsible for the inspection of laser, numerical punch and bending in sheet metal workshop. He is proficient in inspection skills and can draw inferences from one instance. The angle, size and direction of each sheet metal part are the focus of his attention. He must observe and measure carefully. It is inevitable to encounter various processing problems in the production process. It is necessary to coordinate the process and design departments to ensure that the problems are solved in time, so that the production is smooth and the order can be delivered on time. A total of 284 batches of abnormal products were found by him in 2020. Through strict control and careful analysis, the abnormal products were controlled in the embryonic stage, effectively preventing the flow of defective products into the next process and avoiding greater losses. There is no end to quality. In the future, he hopes to make persistent efforts in his ordinary post, continue to play the leading role of Party members, have the courage to innovate, dare to break through, constantly improve his comprehensive ability, and strive for a better tomorrow for the company. Since joining Damon, Comrade Wang Guanghua has scrupulously performed his duties, conscientiously performed his job responsibilities, and has been rigorous, realistic, diligent, strictly abided by the work discipline, strengthened the consciousness of serving customers wholeheartedly. With full work enthusiasm, solid work style and good sales performance, he has been recognized by the leaders. He always acts on the principle of "Being honest, steadfast and practical", straightens his words and deeds, sets himself an example, always demands himself strictly by the standards of Communist Party members, keeps the advanced nature and enthusiasm of Communists, and plays a leading role in the exemplary vanguard of Party members. In the future work, he will be more strict with himself, further improve the level of business, redouble his efforts to do his job, worthy of the cultivation of enterprises and the trust of leaders!

Have faith in your heart, you can go far

The original intention and mission of the Chinese Communists is to seek happiness for the Chinese people and rejuvenation for the Chinese nation. This original intention is also the fundamental driving force for the Communists to move forward. The original intention of Damon Technology is to focus on the R & D and application of intelligent logistics technology and products, continue to work intensively in the field of transportation and sorting, and provide complete solutions from core components, key equipment to intelligent logistics system for leading enterprises in e-commerce, express delivery, clothing, medicine, new retail, intelligent manufacturing and other industries, relying on the competitive advantage of integrated industrial chain, committed to become a a globally influential provider of intelligent logistics system and core equipment. For this common vision, the Damon people have never stopped pursuing, and the Damon Communists have bravely shouldered the burden and consciously undertaken the important mission.

Li Dazhao once said: there is no word "difficulty" in the dictionary of youth, there is no word "obstacle" in the oral language of youth, only knowing leaping forward, only knowing striving for higher aims. A new voyage has begun, the Damon people who are willing to take the initiative and the booming motherland share this encouragement, guide the track of pursuing dreams with their unchanging original heart, and glorify China with their sincere original heart.

Professional Material｜Damon Technology's Official Website in Both Chinese and English Is Renewed and Launched!

By clicking on the button “I accept” or by further usage of this website you express consent with usage of cookies as well as you grant us the permission to collect and process personal data about your activity on this website.Such information are used to determine personalised content and display of the relevant advertisement on social networks and other websites. More information about personal data processing can be found on this link.Read More